Being seated for breakfast at the luxurious The Elephant Camp in Victoria Falls and being greeted by the sound of loud purring… It’s a deep, throaty rumble that leaves you with a warm, fuzzy feeling and in no doubt that you’re accepted, this is Sylvester.
A cheetah at speed has more in common with a bird than any other purring beast. Long before a speckled cat hits its top-speed burst (logged at 120 kilometres an hour) its stride is in excess of eight metres and it seems to touch the ground so briefly as to appear permanently airborne.

In evolutionary terms, its presence is an enigma. In the business of survival of the fittest, its line should have disappeared into species oblivion ages ago. Cheetahs are non-aggressive and will retreat rather than defend their catch. They have small jaws and a weak bite. Out on the savanna, their cubs are heavily predated, with fewer than five per cent reaching adulthood. 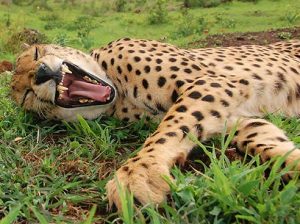 While sprinting, they overheat in mere seconds and take more than half an hour to recover from a burst of speed. In a chase, their breathing rate shoots from 16 breaths a minute to nearly 160. Unlike other cats, their claws are blunt and no good for climbing trees to escape danger. They’ve sacrificed muscle mass for leanness like any good sprinter. And instead of a hearty roar, they cheep like a bird.

But the most astounding feature of all is their skeleton. If it wasn’t on four-legs you’d think you were looking at the bones of a bird. They’re long, frighteningly thin and clearly fragile. Yet genetically cheetahs are the oldest of the cat family – perfect in their savanna niche and unchanged for around three million years. They’ve outlived ice ages and sabre-toothed cats. Their narrow waist, long legs, deep chest, large nostrils, enlarged heart and lungs, special pads for traction and a long tail for balance are all designed around the one thing that has given them an evolutionary advantage: speed.

They can get to 80 kilometres an hour in three seconds, and with a lion’s success rate in hunting of between 10 and 20 per cent, for a cheetah it’s around 50 per cent. They’re magnificent stalkers so they get close to prey. Then with a burst of speed, they trip it and crush its windpipe. Elegant, quick, efficient and thrilling to watch.

Human fascination with cheetahs goes back a long way. Early humans probably scavenged their kills. They were worshipped in Egypt and thought to be escorts for pharaohs into the afterlife (Cleopatra is said to have had more than 1 000 of the big cats). In the 16th century, Mughal emperor Akbar of India kept hundreds for hunting (the cheetah’s name comes from a Sanskrit word which means ‘spotted one’) as did royalty in Russia in the Middle Ages and France in the 1100s. Their association with humans is thought to be longer than that of house cats and almost the same as dogs.

This hasn’t saved them in the modern world. There are presently only about 7 500 adult cheetahs in the wild (fewer than a thousand in South Africa) and some 1 000 in captivity. Their numbers are declining and cheetahs are listed as threatened.
Can we help by breeding them in captivity and releasing them? The problem is that a captive-bred cheetah can’t survive in the wild, the females are very fussy about mating and it takes two years for them to teach their cubs how to hunt and avoid predators. You can’t put a pair in a pen and hope they’ll breed… or expect a hand-reared cat to know how to hunt. Having a cub imprint on a human has endless problems, as they see people as a form of affection, attention and inevitably where their food comes from, which in the end would cause a massive problem.

Out there habitat is crucial. South Africa’s Kruger National Park is densely populated with predators, which compete heavily with cheetah, while on the plains of the Serengeti in Tanzania, tourists often interrupt cheetah kills. The most ideally suited environment for cheetah appears to be Namibia, followed by Botswana and South Africa.

The biggest population of cheetah in South Africa is found on farms along the country’s northern borders. Because of big stock losses, all predators are being eradicated. You can’t blame farmers… they’re just trying to make a living. Cheetah Outreach Project in South Africa breeds Anatolian Shepherd dogs and places them on South African farms to guard livestock in an effort to reduce conflict between farmers and predators. These dogs are intelligent and easy to train when they are pups and can bring down stock predation by almost 100 per cent. However, in rural Africa, the average person struggles to feed themselves and so often cannot afford to feed and care for such an animal. Illegal hunting, snaring, poaching and poisoning of Cheetah is therefore rife, as is shooting on sight. Hope for the future of cheetahs, here close to home in Zimbabwe, or anywhere else for that matter, has to do with range, conservation and reducing conflict with humans.

We hope to educate and create an understanding for these magnificent creatures and their plight, through the interactions with Sylvester at The Elephant Camp and the Victoria Falls Wildlife Trust.

It’s always the same: the cat accepts you, you fall for it and the bond changes you forever. Few people who’ve worked with cheetahs can ever leave them. 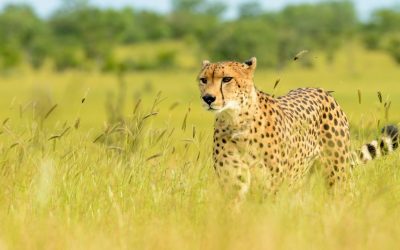 The Odd Couple: A story by Penny & Norman English…   January 1, 2012 Raising Sylvester was an amazing privilege.  He took over our lives from the moment we brought him home.  A mere 520 grams of spotted fur, with the umbilical cord still attached, he was the... 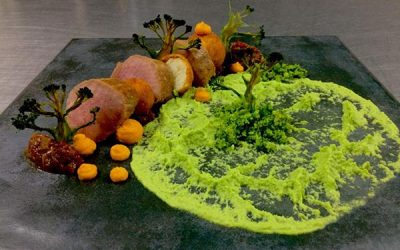 We are honored and humbled! Thank you for voting The Elephant Camp Number 9 Luxury Hotel in Africa & Number 18 Top Hotel for Service, Africa! Wild Horizons are extremely proud to announce that The Elephant Camp has once again won two prestigious Trip Advisor...

Ask for Sibb or Lodge Reservations